5 Reasons Why You Should Jump Out of Perfectly Good Airplanes 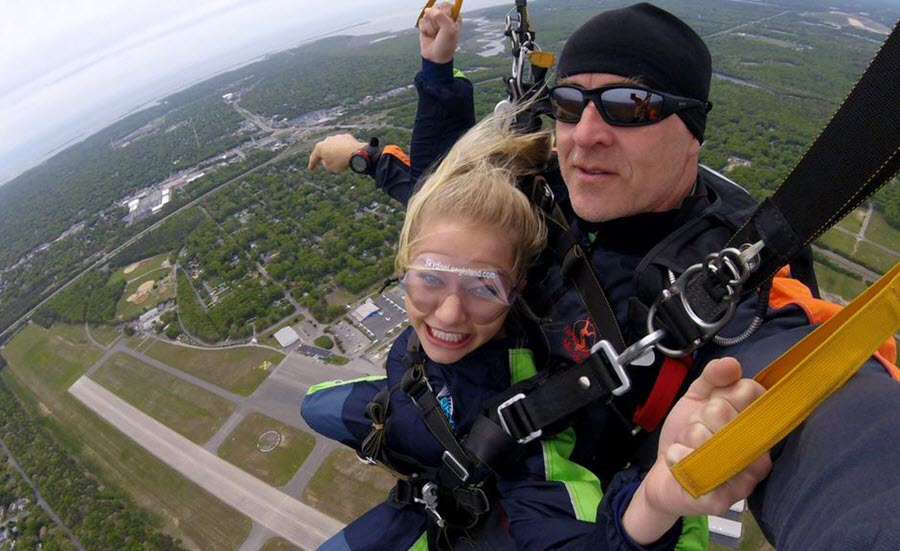 If we had a nickel for every time someone asked, "why would you jump from a perfectly good airplane," we'd own at least 50 Gatsby-sized mansions on Long Island.

This is one of those jokes that skydiving critics have used so often that it has become a cultural norm to think the act of skydiving is an act of absurdity. But as seasoned skydivers and professionals, we're here to quash those stereotypes once and for all.

So why should you jump out of a perfectly good airplane? We could talk to you about it for days on end. But here are five solid reasons you can give to the next person who asks you this when you announce that you just booked your tandem skydive.

The entire time you're heading into your first skydive, your brain tries to convince you that it's a terrible idea. This can lead to nervousness, fear and a flight-or-fight survival mode that could have you backing out of the experience.

When you do tackle that fear, however, and you jump from the plane and into the unknown, you're rewarded with not just an amazing time, but also with the feeling that you've conquered a mental battle. That, we think, is half of the first-time high.

Once you've realized that you can tackle your fears, which are largely mental, it will begin to build your confidence. Heck, you just survived a fall from a perfectly good airplane! You're unstoppable.

This kind of confidence will be carried with you and extended to other parts of your life.

One of the coolest things about skydiving is it makes you hyper-aware of your surroundings. You senses are on overdrive, which forces you to pick up even minute details. This, to be totally honest, might not come with just your first jump but would grow over time as you continued to skydive.

But either way, that awareness is an interesting component of skydiving and one that will help you to realize to live in the present moment.

You'll bond with your friends

When you decide to put your life at risk and jump out of an airplane, it will bond you with whomever you share that experience with -- especially if they're also experiencing it for the very first time.

Jumping with your friends will bring you closer. It's something you'll be able to talk about and laugh about and reminisce about for years to come. Remember that time you jumped out of a perfectly good airline, screamed like a baby and it was caught on film? Watch out - your friends may use this as an embarrassing weapon at your wedding.

We admit that skydiving is a dangerous sport. But we think that the words "extreme" that are encircle it are a bit dramatic. Skydiving is a lot safer than you think.

In 2016, the United States Parachute Association recorded 21 fatal skydiving accidents in the U.S. out of roughly 3.2 million jumps. That's one fatality per 153,557 jumps. Tandem skydiving has an even better safety record, with one student fatality per 500,000 tandem jumps over the past decade.

According to the National Safety Council a person is much more likely to be killed getting struck by lightning or stung by a bee. This isn't a joke.

So relax, tell those naysayers to shush, and come to Skydive Long Island to jump out of a perfectly good airplane! Who wants to land in one of those things anyway?

I've skydived before (4 times) and this experience was by far my favorite and most memorable experience. Erika and Nick were great!