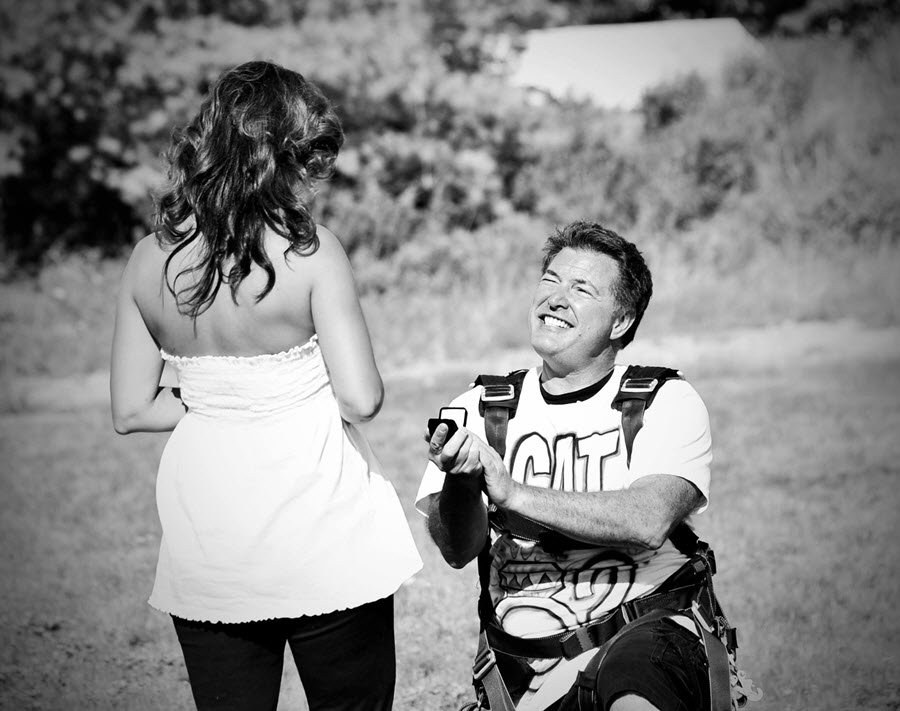 One of our favorite things to celebrate at Skydive Long Island is love. We've watched innumerable proposals here at our beautiful little dropzone--and we watch plenty of couples celebrate honeymoons, anniversaries and...well...Thursdays here with us. That's no surprise, as the experience of skydiving artfully summarizes the most wonderful things about being in a relationship: making a leap of faith and enjoying the results!

If you're planning an amazing gift for the apple of your eye, may we humbly suggest a skydiving gift certificate? It's the best couples gift you'll ever give for all sorts of reasons. Let us bend your ear to convince you!

Experiences vs. Stuff: The Faceoff

Believing that a physical thing is a better gift choice is an easy mistake to make. After all: a bracelet, for example, will last longer than a few minutes; therefore, it's a better gifting choice than would be an experience that happens a single time. Right? Wrong. According to recent research, that's a totally false assumption. In the real world, when we buy things to make us and others happy, we succeed...but that happiness lasts only for a little while. New things are exciting to us at first, but then we adapt to them.

Several related psychological studies delve into a part of this phenomenon that's called the "Easterlin paradox." The paradox goes like this: possessing a thing does net an subjective experience of happiness, That experience hits a ceiling, then adaptation kicks in and the experience hustles back to neutral. (Think about what it's like to drive a new car home--then fast forward to driving that same car home after six months of commuting.)

With experiential purchases, that phenomenon doesn't tend to happen. When a study asked people to report their experience of happiness upon the completion of a major purchase, the differences between experiences and things really showed up in contrast. Initially, the purchasers ranked their happiness with those purchases evenly. The "doers" and the "owners" reported almost exactly equal satisfaction. Over time, however, the "owners" experienced significantly less satisfaction than the "doers." In fact, the "doers" stated that their satisfaction with the experiences they spent that hard-earned money on actually went up.

Maybe that's counterintuitive, but it's quite telling: Experiences last longer and give greater satisfaction to your giftee than would a gadget or a piece of jewelry. But there's even more to the story than that.

Experiences beat out stuff in the gifting department--especially when it comes to couples--in another important way: Experiences are inherently connective. Consumption gives us more stuff to hoard; experiences give us more stuff to share. Sharing a skydiving gift certificate with someone creates a lasting connection; giving a necklace to someone gives them something to put in their jewelry box.

The experience of a skydive will forever bind your memory to your giftee's view of the sky. A skydiving gift certificate puts the whole sky into a letter-sized envelope. That's as close to magic as gift-giving gets--and it's a gift that keeps on giving for the giver and the giftee alike.

Obviously, I was completely terrified prior to jumping and am truly grateful I picked a great place to do this.