How Fast Do You Fall When Skydiving Tandem? 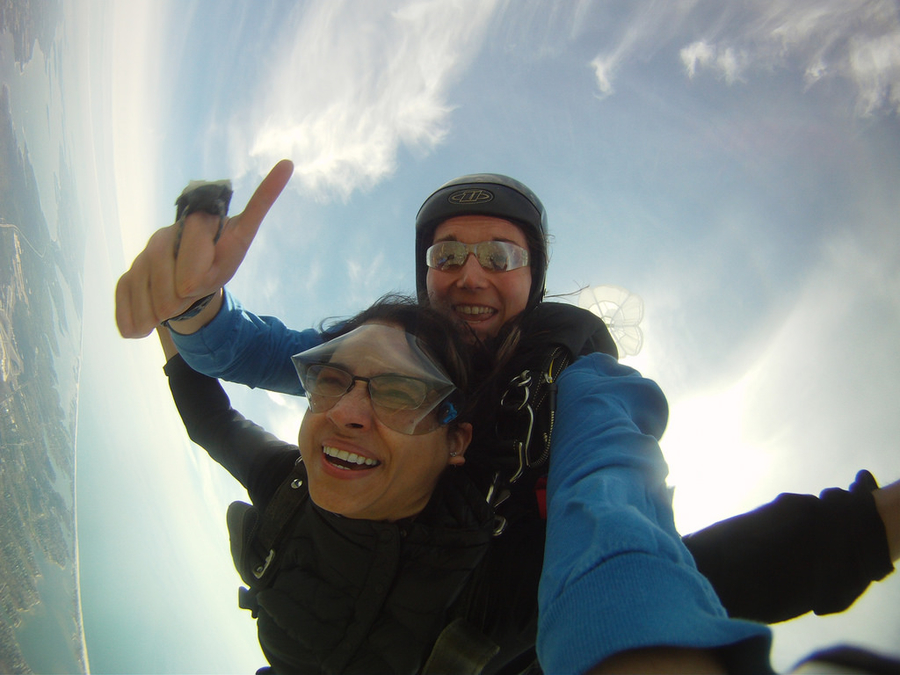 But we're going to depart from that hometown heroism for a moment and de-escalate the drama, just a touch. Because we want to help you understand what's really going on with the speed during a tandem skydive. Mind you: it's probably not as you imagine. (Spoiler: It's better. But bear with us; we'll get there.)

When you see tandem skydiving ads out in the world, you'll notice that the marketing talks a lot about the speed. One hundred and twenty miles per hour! Fast as a race car! Adrenaline-pumping meteor-style superhero-esque ZOOM! OMG SO FAST.

What the marketing is trying to do, obviously, is appeal to your adventuresome ways. (I mean: you're obviously an adventuring type, no?) And indeed, you can expect to be going from the sky to the ground at around 120 MPH until your parachute opens. That's not the whole story, though--and the whole story is actually more interesting than the fluffed-up marketing drama.

You're not going to feel like you're going 120MPH. I know. What?! I KNOW. The marketing plays on the fact that it sounds like there's no way in the world you could, like, miss the fact that you're going 120mph straight down. The fact is, however, you will. And you certainly won't be thinking about it. Lean in and we'll tell you why--and a few other gonzo facts about speed in skydiving.

1. Tandem skydives are so fast we have to slow 'em down.

Just to make you scratch your head even more, check this out: A tandem skydiving pair moves go so fast that there's a special system (called a "drogue") required to slow the pair down enough that they'll experience a safe, comfortable opening. Systemically, then, the speed is under control all the way along--and, even beyond that, terminal velocity sets a speed ceiling. (Touché, physics deniers!)

2. ...But you generally don't have the perspective you need to feel the whoosh.

The human brain needs to triangulate itself in space to feel speed. When you bungee jump, for instance, you're standing on an object among other objects, close enough to the ground that you can hear sound coming from below. When you leave the exit point, your brain uses the objects around you to calculate how fast you're moving relative to them. The same dynamics hold true when you're taking off in a plane; when you're going down a waterslide; when you're flooring it on the highway. The brain has what it needs to make the determination "this body is moving at a pretty zippy clip right now."

In the sky, it has none of that.

In the sky, the world below you appears as flat as a map. Your camera person is on the same plane as you are, moving in the same way as a car that's matching your speed exactly on the road. You even feel supported from underneath by air molecules. It's remarkably peaceful and feels, somehow, miraculously, inexplicably slow. At least, it feels like that until...

3. If you're lucky, your friends the clouds might help you out a bit.

There's one thing in the sky that your brain can use as a reference: the clouds.

If there happen to be a few puffies around when you make your jump, then and only then are you going to feel the full drama of that hundred-and-twenty-mile-per-hour speed. If that happens, your brain will take note of the stationary object, make a few quick calculations, carry the one, hit the 'enter' button and in so doing spash a full bucket of wheeeeeeeeeeee over your head. It feels like going through a finish line-and produces a very similar holler.

That said: Even on a cloudless day, skydiving is our preferred route to 120MPH. Even if it doesn't feel the same as it would on a racetrack, it's the best feeling you'll likely ever feel. Give it a try; you'll see!

Thank you so much staff from Skydive Long Island, I will definitely jump with you guys again!