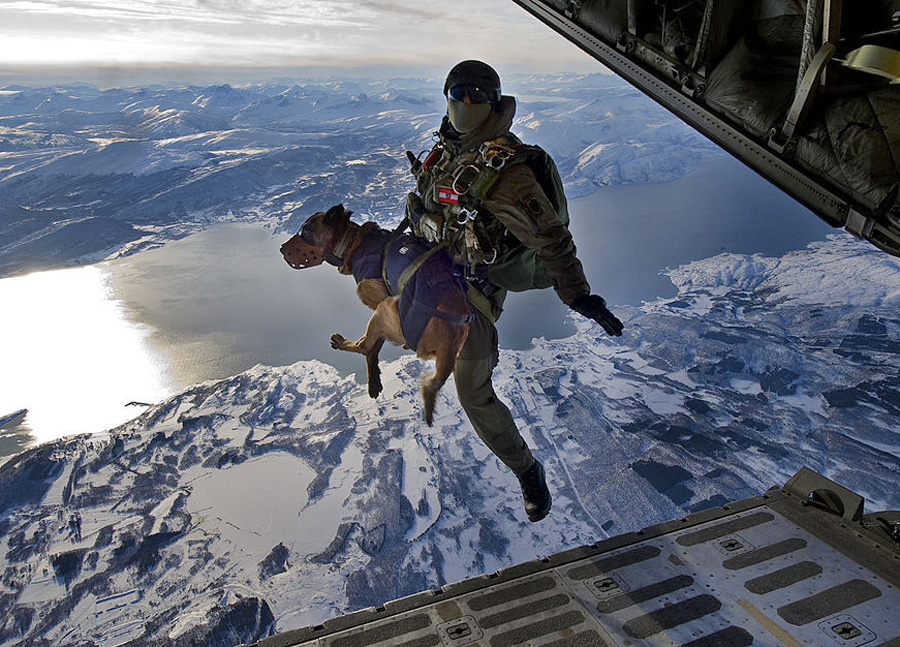 What's even cooler than an amazing dog? An amazing skydiving dog! We've been thinking about skydiving dogs lately, inspired by a few fun videos we've run across, and wanted to pontificate a bit on four-legged flying. There might be a few facts in here that are new to you, so "puppare" for a giggle or two!

Skydiving Dogs on the Job

Most skydiving dogs jump for a purpose. Take canine SEALs, for example - highly trained, highly skilled, highly motivated specialists who take on very challenging duties for the military teams to which they are attached. Trained parachutists, SEAL dogs jump into combat situations either via tandem with their handlers, or solo if the landing will be into water.

These dogs are treated just like other full members of the military. Not convinced? Let's just take the gear into consideration for a moment, shall we? Just like their human handlers, these puppies wear super-strong, flexible body armor and arrive on the scene outfitted with high-tech equipment. They're referred to as "canine tactical assault suits" and sell for almost $90,000 apiece. These skydiving war dogs even rock specially designed and fitted dog goggles for the jump (which are, y'know, night-vision and infrared-capable).

Since you can complete a learn-to-skydive course in just 25 jumps, you can be well assured that these dogs hold higher licenses than many human sports skydivers on the dropzone. Who's a good boy? They know who's a good boy. They're probably better than you are. So don't be stingy with the treats.

It's very rare to see dogs whose fur-parents take them for fun-style parachute jumps -- since federal authorities control aviation, and they don't love the idea of doggie sports skydiving. That said, there have been a paltry few examples. Duke, for example -- a 75-pound pup whose dad, Alex Coker, has jumped four times with him so far. There's also Otis, who made a jump at a legendarily mercenary dropzone in Northern California, and one little dude who made a jump in the United Kingdom.

Mostly, the lucky puppies who get to taste parachute flight are in BASE-jumping families. For examples, check out Paco (a mixed-breed saved from an Arizona desert highway) and Whisper (a blue heeler who actually used to wingsuit BASE jump with Dean Potter).

Dogs on the Dropzone

The fact of the matter is that, while dogs are probably the best thing that ever happened to the planet and we couldn't imagine living without them, dogs and parachutes aren't a great mix. Our dropzone - like most - does not allow four-legged visitors, even on a leash. The environment is just too stimulating for it to be a good experience for our furry friends, and we care about their well-being.

Even so: Make a skydive! That way, next time you're out for a drive with your dog and s/he's got that gorgeous set of floppy ears waving in the wind, you'll be able to relate completely. The world is your window, friend! Come to SLI and stick your head out of it.

Thank you so much staff from Skydive Long Island, I will definitely jump with you guys again!