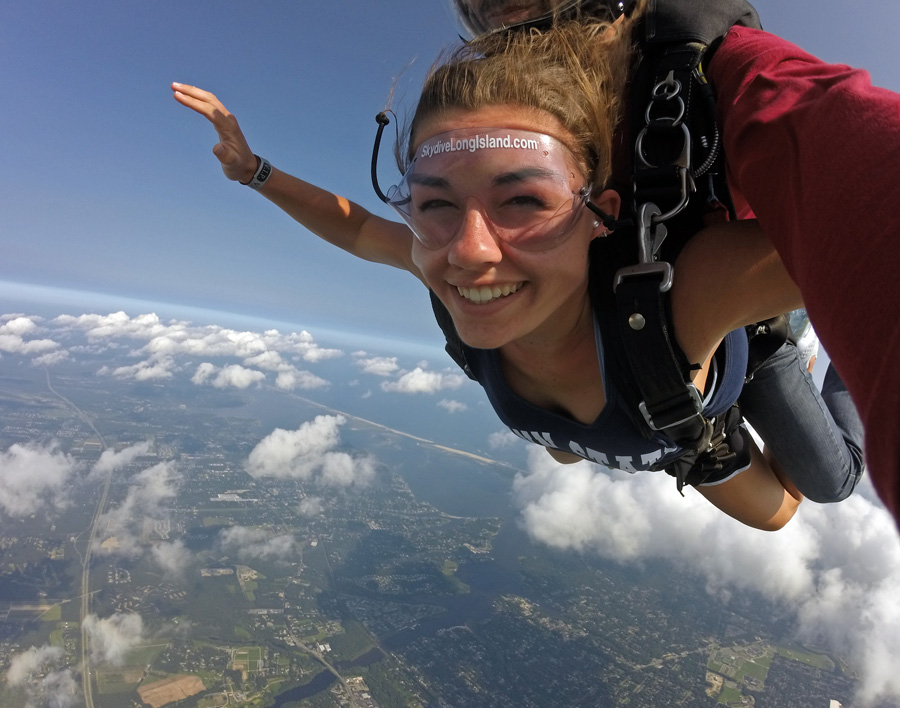 Ah, the study of the physics of skydiving: the practicum of which presents the world's most bombastic science field trip. On paper, calculating the terminal velocity in skydiving looks kinda like this:

How fast does a skydiver - who clocks in at X total weight - fall at X landing altitude in X weather conditions when he/she adopts X body position?

As you can see, it's a titch more complicated than the "120 miles per hour!" the internet usually offers when you ask how fast you fall when you're skydiving. If it's a surprise that you actually get a choice - lean in.

Terminal velocity physics -- as with most things scientific -- gets simpler when fewer variables are involved. That, indeed, is where the internet got its reductionist approach: from the fact that most tandem pairs are comparable enough in size, and adopt a comparable enough body position once they've hit their airborne stride, to be more-or-less comparable at large. That's why it's a commonly thrown-around figure that the average terminal velocity for skydiving hangs out at about 120 miles per hour. It's a solid average for a related group, and it's a nice, clean number.

Another reason 120mph is significant that you can test it for yourself - if you can find a big enough fan: 120 miles per hour is also the precise wind speed at which a standing person loses the ability to stay upright and in one place. (Check out XKCD for the visual on that.)

Try to make your first jump on a cloudless day. Sure, you'll be as full of butterflies as a bag of rotting fruit in the middle of the Amazon, but you'll certainly be able to remember at least one thing about your experience: that you don't feel like you're hurtling down at 120 mph. Unimpeded by visual references, with the world spread out like a map beneath you, you'll hear the wind, but you won't feel like a dog with its head out the window on a Nascar track.

If you're lucky enough to pick a day for your second jump that offers a couple of puffies for perspective, you'll be very surprised. When you pass a cloud on the way down, your true speed is revealed. (And boy howdy is that fun.)

3. Skydiving terminal velocity can change depending on the shape you make.

Once you're a sport skydiver, you have some choices when it comes to terminal velocity on any given skydive. The shape you make -- whether that's the shape you show up in, or the acrobatic maneuvers you perform, or the kind of suit you wear -- factors in heavily.

Heaviness, indeed, is a thing: Heavier folks fall faster. Jumpers in baggier clothing fall slower, because of the extra drag. Body position is a much bigger deal; the more surface area you present to the wind, the slower you go. (Speed skydivers try to point the crown of their head directly at the ground. That kind of skydive is over a little too fast for our taste, but they make for some pretty amazing records.)

Got more questions? Don't be shy! We're happy to answer them for you. Just ask!

For an experience of a lifetime Skydive Long Island is the place to go.