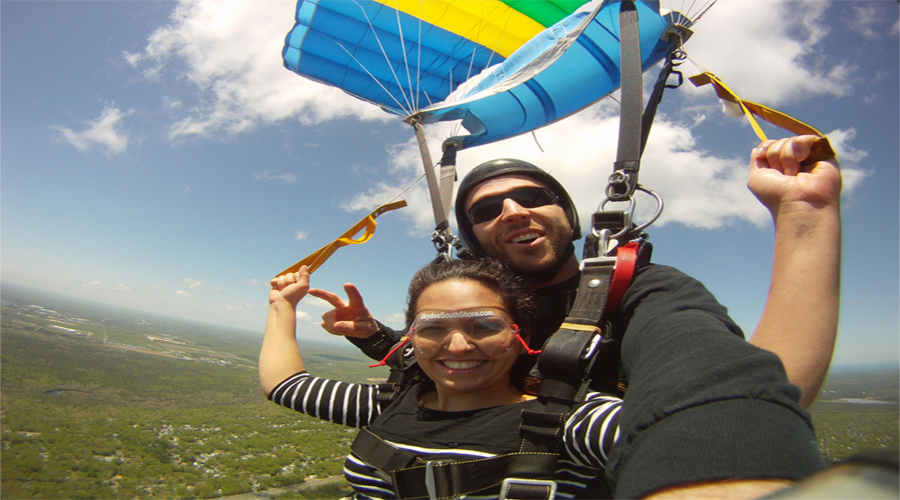 Skydiving isn't just about falling out of planes. It's an adventure.

When you sign up to jump with us at Skydive Long Island, you'll be taken for quite a ride. Every skydive has three distinct phases: freefall, parachute opening and landing. Each stage will be unique, ranging from the adrenaline-pumping freefall to the peaceful canopy ride.

Some people tend to favor the action packed beginning of the jump, while others revel in the second half when they're under a working parachute and gliding through the sky.

We'll explain each stage a little more in detail below. After you experience them personally, we'd love to know which of the three you prefer!

The plane ride can be an experience in and of itself. From our aircraft, you'll see dozens of miles in each direction, from Montauk to the vast expanse of the Atlantic Ocean. But the skydive officially begins once your feet leave the plane. We call this your "exit."

This begins stage one: the adrenaline-pumping free fall. You may experience a brief feeling of falling for a few seconds after you depart the plane. This is when your body is speeding up to reach terminal velocity, which is roughly 120 miles per hour.

Once you reach terminal velocity after a few seconds, however, the experience changes. The best way to describe it is it feels like you're in a wind tunnel, as though someone has a massive fan underneath you, shooting up air toward the underside of your belly.

Some people find it difficult to breathe because of the wind. But please don't be alarmed. You can breathe, even though the experience may leave you breathless!

After approximately 45 seconds of freefall, your tandem instructor will signal to you that it's time to pull the parachute. The sequence of the parachute opening happens at a slow enough pace that you don't have to worry about experiencing any kind of whiplash.

As the parachute begins to unfurl above your head, your body will naturally transition from being in a belly-down freefall position to a vertical position where your legs are dangling from the underside of your harness.

Once the parachute is out, you'll begin a four-minute-or-so canopy ride back down to the ground, where you'll soar around the sky like a bird and be able to take in the incredible views of the ocean and Long Island.

Things will feel much more peaceful at this stage of the skydive. Instead of falling and hearing the loud whoosh of wind rushing past you, you'll be floating quietly.

First-time tandem skydivers tend to fret about the final stage of the skydive: landing. This stage marks the final moments of the jump, when your instructor and you are making the necessary arrangements to make contact with the ground.

To slow your speed in the final five seconds of the jump, your tandem instructor will pull down on the steering toggles, which will cause the parachute to flare, sort of like the wing of a plane.

Your instructor will most likely ask you to stretch your legs out in front of you to prepare for a butt-first sliding landing.

There's only one way to find out which of these three you like best -- book a jump with us today.