Why Can't I Jump My GoPro? 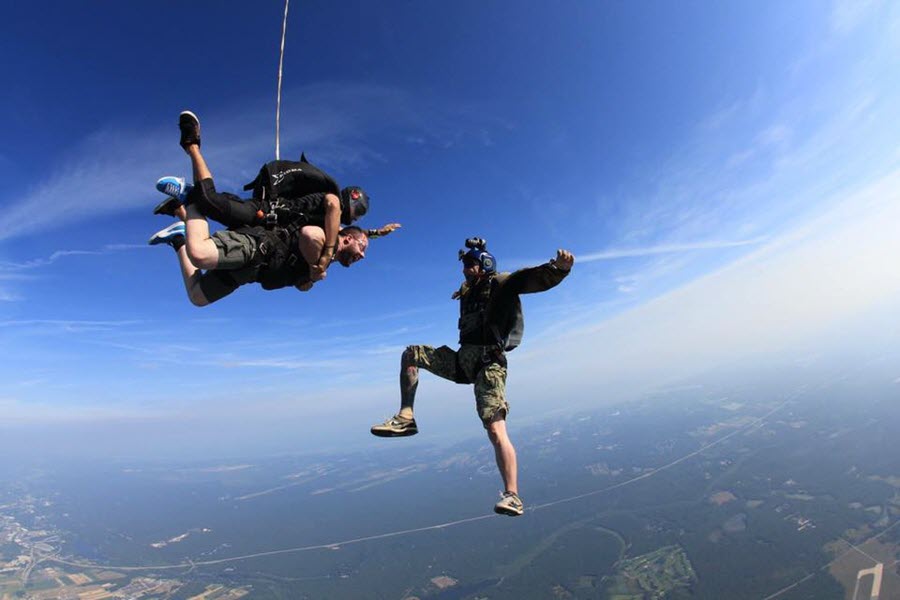 You and your GoPro are the very best of friends. You have an undying partnership that revolves around announcing your heroic exploits to the world at large--after all, if there's no video, it didn't happen. It's stuck to the side of your motorcycle while you careen around the canyons. It's on your dashboard for every road trip. It sits at the front of your dominant ski, gamely staying in place for run after powder-drenched run. It keeps you company on your surfboard. It's everywhere you go. So why not take it for a taste of freefall on a tandem skydive?

Unfortunately, it can't come alone--and there's nothing we can do to change that. In order to get the glorious footage of your tandem jump, you're going to have to leave the cinematography in the capable hands of one of our professional aerial videographers. Before you start stamping your feet, lean in and listen to why.

It's not a money-making ruse.

It may seem suspect that it's a hard-and-fast law that students can't bring a camera on a tandem jump. You probably know your camera very well, and you're likely very confident that it would be fine. In fact, it might well seem like a rule we made up: a sneaky way to snag a little extra cash from every jump.

Rest assured: it's not. It's an edict that has been set down by the United States Parachute Association: No skydiver with fewer than 200 skydives should jump with a camera. Here's how it is: This is skydiving, and not a roller-coaster ride. Thus, your presence on the skydive means that you, as a tandem student, are a skydiver, not a passenger. As such, you're bound to follow the same rules all skydivers follow. (If you're frustrated by the rule, think about the jumper who's already jumped a hundred times and can't yet record it for posterity.)

Cameras have a seriously checkered past in skydiving.

Your little buddy Mr. GoPro might seem totally innocent--and, in lots of situations, he certainly is--but in the sky, he's a surprisingly significant liability. Cameras have been wreaking havoc in the sky since the birth of the sport, because they've been around in some form or another since the very beginning.

Skydiving cameras weren't always adorable little black squares, of course. If you look at the earliest photographs of skydiving videographers, you'll see that the "sports cameras" they were using were actually World War II gun cameras, which had been chopped off of fighter planes and jury-rigged to the first brave skydivers who set about capturing freefall footage. The first skydiving cameras were crazy bulky and crazy heavy--heavy enough to snap the jumper's neck if the parachute opened wrong. These beasts interfered with pretty much everything about the skydive, and they were a honking hazard in every way they possibly could be.

We know you're shaking your head--hard--that a camera like that could be compared to your innocent little GoPro, and in many ways you're right--but there are many ways you're wrong, too. There's much more to the story than solely the camera's size and weight.

Even your adorable little sports camera hides a dangerous secret.

Tiny things, after all, can make a very big difference--and skydiving is all about carefully managing the risks we're aware of.

You know that parachutes are suspended on lines. What happens when, in the very dynamic event of a parachute opening, a person who doesn't know exactly where their body is in space gets a small device tangled in those lines? Mayhem. Even the smallest camera can cause a huge malfunction if it snags up in the spaghetti mess that emerges from a skydiving container on opening. Even a single snagged line can stop the parachute from being able to properly fly, which puts both you and your tandem instructor at severe risk.

The USPA uses exhaustively collected stats to develop their rules, and those stats have spoken: line snags due to cameras are unnervingly common when the skydiver holding the camera doesn't have sufficient skydiving experience to know precisely where the camera should and shouldn't be. Skydiving videographers--and tandem instructors, when they're the ones weilding the gear--use skydiving-specific camera mounts (and loads of know-how) to keep all of that complicated parachuting equipment well clear of the camera.

Something else to note: Cameras are very distracting. It's not at all uncommon for a camera to get in the way of proper response to emergency situations, and that's statistically a lot more likely when the jumper has performed fewer than 200 skydives. In brief: A new jumper can't safely handle both a camera and a skydive at the same time. (Unconvinced? Just wait until you make that jump. It's a lot more everything than you imagine it will be.)

You want to leave room for the fun.

You can drop the long face now! According to all the data and experience we've collected as a sport, we're absolutely certain that it's safer, more satisfying and more fun to make a skydive when you're simply focused on having the time of your life jumping out of a plane. The footage will be there for you when you land, because our talented videographers will make sure it is. Bonus: Your GoPro can be right there to greet you on the ground, in the capable hands of a friend or family member who's ready to capture your triumphant landing.

Oh, and by the way: When you share your tandem skydiving video with the world, be sure to tag us when you post that sucker! We'll 'like' it up a storm.

It was an amazing experience and I can't wait to jump again. My instructor was great, experienced, and made me feel at ease. I'd highly recommend it to anyone.