Is Skydiving a Sport? 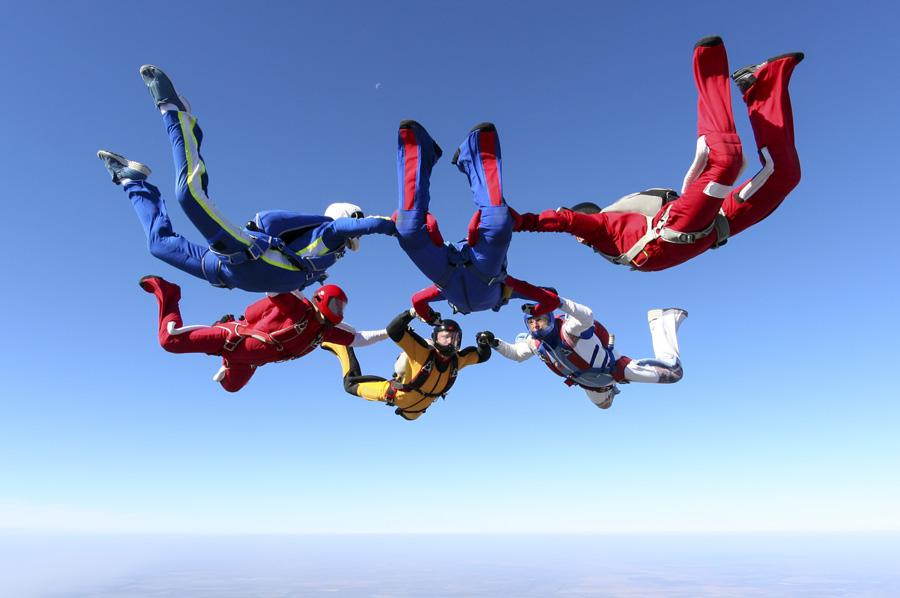 Is skydiving a sport? Oh very much so yes.

There's no bones to make about it: Skydiving is popular. Tens of thousands of curious first-timers make their first skydive every year, and a growing number of those land from that first jump adamant to make their second as soon as possible. Hundreds go on to successfully earn their solo skydiving licenses - and turning what might have been a one-shot wonder into a happy, exciting lifestyle. That sticking power owes much to the fact that skydiving is an adventure sport par excellence.

Simply put, the definition of a sport is a "physical activity that is governed by a set of rules or customs, often engaged in competitively." But the reason skydiving has such staying power is because it is, definitionally, a sport in every way you can define the word. The sport of skydiving offers many facets for a keen perusal; we'll take a look at some - not even all! - of them here.

The sport skydiving community, with all its many thousands of members, thrives worldwide. Sport skydivers compete in regional, national and international competitions, either solo or in teams. We engage the support of mentors and coaches to help us advance in our chosen field. We train hard in any of a number of disciplines and sub-disciplines, and we use equipment specialized to optimize performance in the discipline we're pursuing.

All that aside: It's about the spirit, right? One of the main things that makes skydiving so very much a sport is that skydiving places intense focus on innovation and self-improvement. As with any sport, skydiving is one in which hard work, perseverance and a passion to succeed are rewarded with improved abilities, skills and accomplishment.

The Many Faces of Sport Skydiving

We've talked a little bit about "disciplines," which may have left you with a wrinkled brow. After all, a tandem skydive's simple, stalwart, built-for-safety-not-performance structure doesn't meaningfully approach the kind of skydiving in which sport jumpers spend ten jumps a day dialing in the details. Here's a little "tasting list" of the disciplines most sport skydivers choose to practice, obsess over and compete in:

Formation skydiving is done in a belly-to-earth orientation. (That's the same orientation you've experienced in a tandem skydive.) The difference is the speed, the relationship and the complexity. In FS, skydivers exit the aircraft in linked groups (usually, four or eight) and move around, constantly unlinking and re-linking, to create as many series of set formations as they can together in the shortest possible amount of time.

In competition, judges are looking for the team's accuracy and speed in building these formations in the correct order within the 35 seconds of 'working time' freefall allows. (To give the judges what they need to evaluate the jump, a camera flyer flies above the formation and records the work for the judges on the ground.)

Functionally, VFS is pretty similar to FS. However: the 'V' means 'vertical' - making belly-to-earth only one of a great many possible bodyflight orientations. The introduction of head-up and head-down into the mix greatly increases the variance in speed and the potential for the formations to move quickly at an angle. The flyers' body positions are considerably less stable than belly-to-earth. Judging criteria are similar.

Freestyle is kinda like the figure skating of the sky. As such, it's a two-person discipline, with one performer and one camera flyer to get it all on record. It looks like dancing, and it's judged like dancing, too.

Judging is based on the artistic merit of the routine the freestyler puts together and on the difficulty of the moves shown in a given routine. To make sure everyone is judged on a solid mix of skill and creativity, freestyle skydivers must perform both free routines - in which the flyer performs a routine they've choreographed themselves - and compulsory rounds, in which they perform moves set by the competition.

If FS and VFS are downhill skiing, Dynamic and Freefly are somewhere over in the park, shredding gnar. When it's funtime at the dropzone, freefly jumps get groups of skydivers together to get head-up and head-down in ever-changing configurations, moving around the sky quite liberally until deployment altitude. When competing, these disciplines are judged along similar lines to freestyle - with free rounds and compulsory rounds - to keep skill and artistic merit in equal focus.

For some skydivers, freefall is far from the heart of the matter; it's the nylon they're really looking to perfect. Displays of parachuting ability are also, naturellement, competitive and judgeable in various ways.

Canopy piloting competitions take different metrics in hand, depending on the event, and far different equipment: landing accuracy, for instance, requires a canopy that resembles a BASE jumping parachute in many ways, which can descend almost straight downward for a competitor to touch a coin-sized target with her toe. Distance competitions, during which the pilot is judged on how much distance he/she can cover across the ground using their parachute, require a tiny, zippy, super-high-speed canopy; often, the pilot will wear weights to roll back the throttle.

We have no issue with the fact that many people decide the intensity of the ecstatic experience of their first skydive was enough. Sport skydiving isn't for everybody! We get that.

Ater all, competing in skydiving comes with a whole lot of work! We train for performance at the gym; we make hundreds of practice skydives; we invest in the very best coaching. Sport skydivers have to make a big commitment to their discipline if they want to be the best.

One note we'd like to make is that you don't have to get into skydiving solely for the purpose of competing. Other goals in skydiving could be earning your next license or rating, racking up the skills necessary to participate in a world record, becoming an instructor, or simply enjoying the passionate, tight-knit, adventuring worldwide community that skydiving brings together.

But if it is for you - if you land from your first tandem skydive with the passion to know and experience more of what this awesome adventure sport has to offer - then you owe it to yourself to try. No? Get that solo skydiving certification and let's go play!